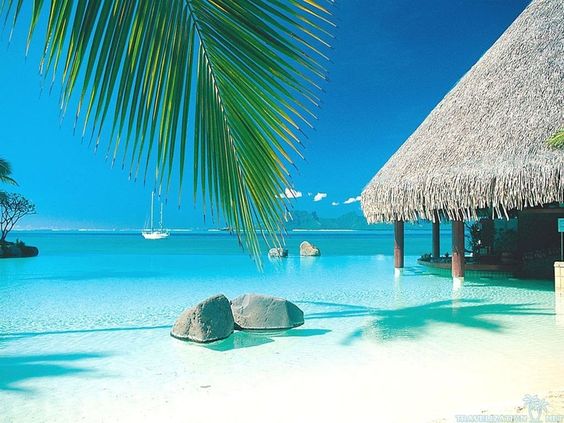 French Polynesia’s largest island, Tahiti, is a popular vacation destination. The island is divided into Tahiti Nui and Tahiti Iti, with the large western peninsula and smaller eastern peninsula. Captain James Cook explored Tahiti in the 18th century, and the islands often featured in the works of French artist Paul Gauguin. Discovering this beautiful paradise is an incredible experience that you can’t miss.

If you’re looking for a fun and colorful place to visit while on vacation in Tahiti, look no further than Papeete, Tahit. This bustling city has everything from local shops and eateries to a vibrant arts scene. During your stay, you’ll want to spend some time exploring the city’s waterfront. While you’re there, don’t miss the Ono’u international graffiti festival, which happens annually in the city. Papeete is also famous for its fresh fruit, especially pineapple, bananas, and coconut products. However, there are also local favorites like breadfruit, which has a fascinating history.

Papeete has a tropical monsoon climate, and there are two distinct seasons: the wet and the dry season. While the dry season is relatively short and mild, the wet season is long and heavy. Temperatures in Papeete are consistently around 27 degC. If you’re planning on visiting the island, consider the weather when deciding whether to go walking or take public transportation.

While visiting Papeete, consider a boat trip to Moorea. Moorea is a 25-minute ferry ride from Papeete. Alternatively, take a taxi to the island of Tahiti. While there are taxis and buses available, you’ll need to plan ahead because the le truck doesn’t run every minute. In addition, recent typhoons have damaged roads, so take care to plan ahead.

If you’re looking for a great place to start exploring French Polynesia, you’ll want to spend some time in Papeete, the capital of the island. While it isn’t the most picturesque place to visit, Papeete offers a taste of the French Polynesia lifestyle. And if you’re looking for a good bargain, check out the Marche de Papeete market, located just off the main thoroughfare.

Discover the kaleidoscope of aquatic life and see sharks and rays in Tahiti’s lagoons! This UNESCO World Biosphere Reserve is one of the most spectacular locations in the world for snorkeling and diving. A glass-bottom boat tour is a great way to see the marine life up close and personal. The lagoons are home to over 800 species of fish and coral. Once you’ve seen the stunning beauty of these lagoons, you’ll know why Tahiti is one of the world’s top snorkeling destinations.

There are three main types of coral reefs in Tahiti’s lagoons. There are ‘fringing’ reefs, barrier reefs, and lagoon-surrounded corals. During Charles Darwin’s Beagle voyage, he was amazed by the diversity of these reefs. The corals here are especially vibrant, thriving with life. To visit one of Tahiti’s coral reefs, you should plan a snorkeling tour.

One of Tahiti’s largest atolls, Rangiroa, has more than 240 motu. It’s famous for its spectacular diving and is home to some of the world’s most beautiful coral gardens. Command Cousteau has even rated the Rangiroa lagoon as one of the world’s best lagoons. Its jade green waters are a beautiful sight to behold.

A popular port city for French Polynesia, Papeete is the perfect jumping off point for visiting Tahiti’s beaches and lagoons. This city is also home to a vibrant nightlife, bustling local markets, and mouth-watering local food trucks. Explore the town’s culture with a visit to the Mapuru a Paraita market and Musee de la Perle (Black Pearl Museum).

The Pomare Dynasty of the islands of Tahiti ruled over an area of three million square kilometers (1.3 million square miles) and left a lasting mark on the Tahitian culture. They had diplomatic relations with the Cook Islands, influenced Rapa Nui, and produced an unprecedented period of cultural ascendancy. However, the reign also saw Tahiti fall into foreign hands and endure many wars.

The Pomare were often questioned for their elitist behavior, despite their respect for traditional politics. To’ohitu was highly intolerant of Mamaia and the chiefs of Pape’ete, Utami, and ‘Aimata expelled people who supported them. However, chiefs of lesser status were more likely to support the Pomare, and they probably hoped for titles and lands.

The Pomare dynasty of Tahiti was a British-backed king. In 1877, Pomare IV died of natural causes. His successor, Pomare V, reigned from 1877 to 1880. Their daughters were crowned Queen Pomare VI and Pomare VII. Their descendants were the last of the Pomare dynasty.

The Pomare and Vaira’atoa vied for power and position in the islands. However, the latter contested the King and Queen’s position, leading to a “cloth incident” in 1829. The Pomare Code says that Pomare IV, in lieu of tribute, asked the people of Mo’orea and Tahiti to donate cloth every year. During the reign of the Pomare IV, this cloth was offered to the chiefs of the Leeward islands during their visits to Tahiti.

Although the first Pomare II and his son Pomare III, were not heirs to the throne, it was a dynasty nonetheless. The Pomare line was continued for many years until the missionaries brought Tapoa II to the islands to be the next King. The missionaries were happy that the Pomare line would continue, but their concerns about the line were intensified when the infant’s death led to his abdication.

There are several traditional instruments in Tahiti. Drums are the most important among them. The main drum is called the to’ere and is played with a drumstick or with the hands. Two main drums are used in traditional ensembles, fa’atete and tano. Each of them has different sound characteristics and can be distinguished from each other by their shape and carving. The to’ere is typically the largest of the three and can measure up to six feet long. The fa’atete is smaller and carved and is played with the hands. Its sound is hollow with moderate resonation.

The fa’atete drum is a medium-sized drum with a single head. It is made of coconut fiber and is attached to a pedestal with footed bottoms. It is traditionally played by two people. One drummer beats the larger one called the Tatasi while the other beats the smaller drum called the Talua. The fa’atete drum is similar to the pahu tupa’i rima, but it is played with hands.

Drums were a common part of Tahitian music before the arrival of Europeans. The Tahitian ukulele is similar to the banjo, but is more a form of the ‘ukulele.’ Festivals played a major role in the Tahitian music scene. Before the arrival of Europeans, the islanders celebrated life with dancing. Dances were performed at festivals, to celebrate, to pray, and to mark almost any occasion. The men’s ‘upaupa is a typical example.

Besides the ukulele, there are other traditional instruments. Bamboo Nose Flute is an ancient instrument that is played by nose. Coconut shells are also used to make instruments like the puniu. A double gourd instrument called ipu heke is also used for percussion. Its sound is distinctive and distinct. Its sound is unique and can be heard throughout the Polynesian music.

While scuba diving in Tahiti, you may be surprised by how diverse the sea life is. You may encounter turtles, manta rays, eagle rays, and sting rays. If you’re a beginner, the best place to start is the Stingray World, located inside a lagoon. Stingrays are wild animals, but they thrive in the lagoon. You can feed them fish. Don’t worry; your dive guide will show you how. You might also spot black tip sharks and humpback whales.

Scuba diving in Tahiti is safe year round. In the dry season, visibility is around 50 meters, and visibility is generally between 15 and 50 meters. The coolest time to go scuba diving in Tahiti is in May to October, when the water is between 26 and 30 degrees Celsius. Most dive sites are accessible to people who have completed an Open Water Diver course or a similar certification program. During the dry season, water temperatures are around 24C. Some dive sites are quite crowded. Nevertheless, visibility is still comfortable at recreational depths.

If you are planning to do more than one dive in a day, you should log each dive. Log the time, depth, residual inert gas levels, equipment used, and conditions. Scuba diving in Tahiti is fun and safe, and you’ll never regret your decision to dive there! It’s the perfect vacation destination! And what better place to go scuba diving than in the Windward Islands?

Scuba diving in Tahiti can include shallow lagoon dives with rays, pass dives where you can see gray sharks, and caves filled with turtles and giant wrasses. There are many popular dive sites in Tahiti, including the Aquarium, White Valley, and St. Etienne Drop-off. There’s a wide variety of diving opportunities to suit everyone’s needs.